The third class of Tampa Bay Rays prospect to hit our shores grew again in volume from the previous year, with seven of the organisation’s promising youngsters arriving to help the Alcohol. Think Again Perth Heat to the Australian Baseball League’s equal second-best record.

The Heat finished 23-17, which was superior to every team in the Northeast Division but only good enough for third spot in the Southwest Division and saw them enter a one-off wildcard play-off with the Canberra Cavalry. Again, the Heat weren’t able to deliver on their promise and exited at the first post-season hurdle despite excellent seasons from the young Rays’ bats.

The youngest of the arrivals at just 19, Venezuelan catcher Alvarez was sent to Perth to build on his showings in rookie ball and a promising start to his minor league career. While in Perth he enjoyed the bulk of the catching duties and committed just 2 errors in 186 innings behind the mask. At the plate, he delivered a solid .260/.287/.281 slash line, collecting 25 hits and driving in 8 runs. Will be best remembered for twice walking off the opposition in extra innings wins over Canberra and Melbourne.

As noticeable off the field for his bleach blond dreadlocks as he was on the field for a series of spectacular plays at leftfield, Niko Hulsizer gained somewhat of a cult following while in Australia. The Pennsylvanian-born right hander played 40 matches in the ABL with a batting average of .270 and his 37 hits included 10 homeruns and 10 doubles. Drew 10 walks to boost his OBP to a very respectable .325, Hulsizer also stole 3 bases and drove in a team-leading 35 runs.

The imposing first-baseman brought a solid rookie and minor league record with him to Australia, and he continued his development down under with a strong showing in the ABL. The 2018 late-round draft pick batted .276 with 40 hits including 6 homeruns and 26 RBI.

After hitting .350 in his first season at rookie ball level Qsar’s numbers dipped at A-level and his stint with the Heat presented him with a perfect opportunity to get in more reps in a hardened professional setting. It paid off as the Californian hit at a .321/.465/.567 slash with 8 homeruns and 9 doubles among his 43 hits. Also showed good speed between the bags and nabbed a team-leading 8 stolen bases, and in the outfield his ability to quickly cover the ground saw him in the right place to make a number of crucial putouts.

A fourth round draft selection in 2014, the Virginian right hander went straight from high school into rookie ball where progressed all the way to Double-A before being sent to Perth. In 10 starts Bivens pitched 19.2 innings and finished with a 1-3 record, 4.38 ERA and 13 walks. On the up side, Bivens showed off a wicked breaking ball and chalked up 2 saves with 18 punch outs against opposing batters.

Another talented young player from the Dominican Republic, Garcia was assigned to Perth to build on positive showings in the Dominican Summer League, rookie ball and High-A ball. He arrived with a reputation for bringing the heat with a fastball in the high 90s, and his eight appearances saw him collect 2 wins, a 1.72 ERA and 23 strikeouts in 15.2 innings, while giving up just 9 hits and 3 earned runs.

Like Garcia, Lugo was just 20 years old and from the Dominican Republic. His 2019 season included 13 appearances at rookie and Lower-A level before arriving in Perth. He added 6 more appearances to his record down under, finishing with a 4.00 ERA in 9 innings with 8 strikeouts.

A second baseman taken in the 35th round of the 2015 MLB draft by the Rays, Butera spent only two seasons in minor league baseball before the Rays told him they saw excellent coaching qualities in him and that his future lay in coaching. In 2018, at just 25 years of age, Butera took over as manager of the Hudson Bay Renegades after spending 2017 on the coaching staff. He was sent to Perth to gain extra experience in a new environment. 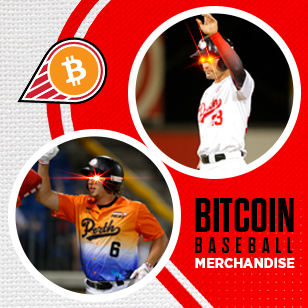